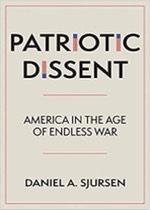 作者：Daniel A. Sjursen
出版社：Heyday
1、
Most see the military as either a dutiful calling or a socialistic (though they’d hardly use the term) meal ticket replete with housing, health, and pecuniary benefits. Because ironically for a military full of Ron Paul libertarians, especially in the officer corps, who at least theo retically hate socialism, its members serve in the most socialst institution in the United States.
P100 / 2022-09-12 11:06
2、
The ever-cynical Nixon grasped one profound, if inconvenient, truth about many young peace activists: they were as much, if not more, anti-draft as they were antiwar. Selfishness, Nixon knew as well as anyone, is, for better or worse, a core aspect of the human condition. So he largely succeeded in taking much of the steam out of the protests by decreasing troop levels in Vietnam, concurrently escalating aerial bombardment of enemy cities, conducting illegal bombings of neighboring Laos and Cambodia in secret, and — most vitally — taking most (particularly privileged) Americans’ “skin” out of “the game.”
P79 / 2022-09-12 10:18
3、
What is the variable between the KU students of 1970 and the KU students fifty years later? To me the answer is simple: the draft. During the Vietnam War, even college students, who were deferred while enrolled in classes, faced the prospect of military service, potentially even combat, upon graduation. Nothing so motivates a young adult to follow foreign policy, to weigh the advisability or morality of an ongoing war, as the possibility of having to put “skin in the game.”
P78 / 2022-09-12 10:17
4、
So in my assessment anti-imperialism is as American as apple pie. Unfortunately, that tradition is lost in the modern age, definitely since the mandatory faux patriotism reigned in the wake of the 9/11 attacks and, if we’re honest, probably since the US government convinced itself and its people that America singlehandedly won the Second World War, never mind the twenty million Soviets who died in it.
P75 / 2022-09-11 11:59
5、
A republic, however flawed from its inception it may be, is most likely to lose its way, to shred its institutions and betray its promise, through the execution of aggressive war, militarism, and imperial pretensions.
P75 / 2022-09-11 11:57
6、
America entered World War II because Japan attacked Pearl Harbor- the immediate catalyst for intervention-and, more acutely, because of the perceived geopolitical threat of a victorious, expansive Germany.
P45 / 2022-09-07 13:50
7、
Passive principled patriots, unlike the pure pageantry crowd, may not always support the government in power (especially if it is conservative Republican) or agree with the prudence of some of its particular wars, but for the most part they limit their opposition to muted complaints, ad hominem attacks on a particular political leader (Bush, Trump), and voting out that figure, all within the constraints of the established two-party system.
they’re terrified of the ready pejorative attacks from pageantry patriots.
If necessary, they will out-patriot the pageantry patriots!
P29 / 2022-09-05 23:52
8、
“Pageantry Patriotism.” Primarily focused on self-conscious public displays of gratitude and ceremonies, it sadly best matches modern American culture in this materialist, millennial age. This is the patriotism of flags, parades, anthems, pledges of allegiance, yellow ribbons, and vapid thanks. The beauty of it is that it is worn as a badge of honor, a point of pride, but requires no work, no critical thinking, no engagement with current events or inconvenient facts.
P27 / 2022-09-05 23:45
9、
“One Nation Under God” wasn’t slapped onto the end of the Pledge of Allegiance and “In God We Trust” wasn’t printed on paper currency until 1956 and 1957, respectively. These (perhaps fashionably) late moves were, of course, made only in response to the perceived atheism of communism at the height of the Cold War, as a way to drum up nationalism, encourage unity, and differentiate the supposedly God-fearing United States from the evil, soulless heretics of the Soviet Union and Red China.
P24 / 2022-09-05 23:14
10、
In fact, it’s unclear that the nation-state in its current form is necessarily here to stay or the preferred social and organizational construct of most or all people. To assume so is in itself a form of Eurocentrism or Western-centrism, the commonly held belief that because first Europe and then North America coalesced into such entities, this is the highest form of socio-structural development.
P21 / 2022-09-05 10:32
11、
The trick, for the owners of this country — the corporate tycoons, the media moguls, and the politicians they controlled — was how to bide an empire, how to convince the populace that their government’s palpable imperium was anything but. That the US policy of global hegemony was a benevolent enterprise, the price of peace; that America was, as so many politicians repeatedly declared, “exceptional,” an “indispensable nation.” This hoodwinking conspiracy required, demanded, a whitewashing of America’s historical record: of native genocide, black slavery, the aggressive Mexican-American War, conquest and suppression of the Philippines, murderous campaigns in Vietnam and Southeast Asia, and now the counterproductive bloodletting in the Greater Middle East.
P8 / 2022-09-05 09:51
12、
Knowledge and experience are the twin necessities for enlightenment.
P4 / 2022-09-05 00:22
13、
Ignorance, cultural obtuseness, I’d come to realize, was an American military trademark.
P3 / 2022-09-04 18:36
14、
What they don’t tell you — and what necessarily (if unfortunately) isn’t illustrated in action-packed Hollywood war movies-is that war is mostly boredom, punctuated by brief moments of sheer terror.
P2 / 2022-09-04 18:35
15、
There is a tragic flaw in our precious Constitution, and I don’t know what can be done to fix it. This is it: Only nut cases want to be president. This was true even in high school. Only clearly disturbed people ran for class president.
2022-09-04 18:00