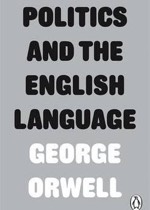 作者：George Orwell
出版社：Penguin
1、
Hitler, because in his own joyless mind he feels it with exceptional strength, knows that human beings don’t only want comfort, safety, short working-hours, hygiene, birth-control and, in general, common sense; they also, at least intermittently, want struggle and self-sacrifice, not to mention drums, flags and loyalty-parades.
P24 / 2022-12-02 19:05
2、
When there is a gap between one’s real and one’s declared aims, one turns as it were instinctively to long words and exhausted idioms, like a cuttlefish squirting out ink.
P15 / 2022-12-02 18:07
3、
A scrupulous writer, in every sentence that he writes, will ask himself at least four questions, thus: What am I trying to say? What words will express it? What image or idiom will make it clearer? Is this image fresh enough to have an effect? And he will probably ask himself two more: Could I put it more shortly? Have I said anything that is avoidably ugly?
P13 / 2022-12-02 17:55
4、
The attraction of this way of writing is that it is easy. It is easier – even quicker, once you have the habit – to say In my opinion it is a not unjustifiable assumption that than to say I think. If you use ready-made phrases, you not only don’t have to hunt about for words; you also don’t have to bother with the rhythms of your sentences, since these phrases are generally so arranged as to be more or less euphonious.
P11 / 2022-12-02 15:54
5、
In the case of a word like democracy, not only is there no agreed definition, but the attempt to make one is resisted from all sides. It is almost universally felt that when we call a country democratic we are praising it: consequently the defenders of every kind of régime claim that it is a democracy, and fear that they might have to stop using the word if it were tied down to any one meaning.
P9 / 2022-12-02 15:29