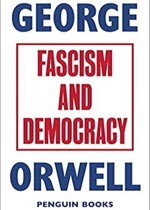 作者：George Orwell
出版社：Penguin Classics
1、
The people most likely to be affected were the poor, the ill-educated and, above all, people who were economically insecure or had unhappy private lives. The evident connection between personal unhappiness and readiness to believe the incredible is its most interesting discovery.
P29 / 2022-12-07 17:04
2、
It is known that the newspapers are habitually untruthful, but it is also known that they cannot tell lies of more than a certain magnitude
P27 / 2022-12-07 17:00
3、
The point is that the relative freedom which we enjoy depends on public opinion. The law is no protection. Governments make laws, but whether they are carried out, and how the police behave, depends on the general temper of the country. If large numbers of people are interested in freedom of speech, there will be freedom of speech, even if the law forbids it; if public opinion is sluggish, inconvenient minorities will be persecuted, even if laws exist to protect them. The decline in the desire for intellectual liberty has not been so sharp as I would have predicted six years ago, when the war was starting, but still there has been a decline. The notion that certain opinions cannot safely be allowed a hearing is growing. It is given currency by intellectuals who confuse the issue by not distinguishing between democratic opposition and open rebellion, and it is reflected in our growing indifference to tyranny and injustice abroad. And even those who declare themselves to be in favour of freedom of opinion generally drop their claim when it is their own adversaries who are being persecuted.
P24 / 2022-12-07 13:12
4、
A difference of degree is not a difference.
P4 / 2022-12-07 11:38