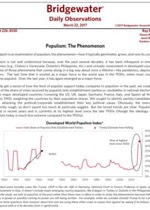 作者：Ray Dalio
出版社：Bridgewater Associates
1、
In the first decade of the 1900s, Argentina was as rich as Western Europe, with GDP per capita at about 95% of the level of the UK and 80% of the US. Its agricultural-export-oriented economy drew many immigrants and attracted plenty of foreign capital to finance growth in railways and industries. Parallels between the United States and Argentina were common.
P45 / 2022-11-21 09:33
2、
Through the 1920s, fascism in Britain was a fringe movement, with its influence limited to minor demonstrations and petty acts of vandalism by a handful of radical groups. In the 1930s, the ideology gained in popularity as the Great Depression worsened in the UK. To some, the emerging Italian and German autocracies began to look like examples of effective “modern” government in comparison to the UK, with streamlined state control that cut through the bureaucracy.
P28 / 2022-11-12 14:52
3、
By and large, these populists took advantage of the confluence of several characteristics of the times:
Weak economic conditions, which made people disillusioned with the current ruling parties.
An uneven recovery in which the elite was seen as prospering while the common man was struggling.
Political squabbling/ineffectual policy making, preventing the bold action people saw as necessary.
A feeling among a country’s majority that foreigners, or those who didn’t share the same
background/ethnicity/religion, were threatening their values and way of life.
P5 / 2022-11-10 17:59
4、
Populism is a political and social phenomenon that arises from the common man being fed up with 1) wealth and opportunity gaps, 2) perceived cultural threats from those with different values in the country and from outsiders, 3) the “establishment elites” in positions of power, and 4) government not working effectively for them. These sentiments lead that constituency to put strong leaders in power. Populist leaders are typically confrontational rather than collaborative and exclusive rather than inclusive. As a result, conflicts typically occur between opposing factions (usually the economic and socially left versus the right), both within the country and between countries. These conflicts typically become progressively more forceful in self-reinforcing ways.
P2 / 2022-11-10 17:48
5、
But the broad trends are clear. Populism has surged in recent years and is currently at its highest level since the late 1930s (though the ideology of the populists today is much less extreme compared to the 1930s).
P1 / 2022-11-10 17:43