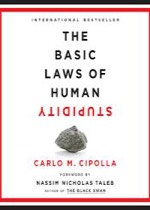 作者：Carlo Cipolla
出版社：Doubleday
1、
A stupid person is more dangerous than a bandit.
P70 / 2022-09-22 23:02
2、
Non-stupid people always underestimate the damaging power of stupid individuals. In particular non-stupid people constantly forget that at all times and places and under any circumstances to deal and/or associate with stupid people infallibly turns out to be a costly mistake.
P62 / 2022-09-22 21:29
3、
when confronted with stupid individuals, intelligent men as well as bandits often make the mistake of indulging in feelings of self-complacency and contemptuousness instead of immediately secreting adequate quantities of adrenaline and building up defenses.
P61 / 2022-09-22 21:27
4、
Essentially, stupid people are dangerous and damaging because reasonable people find it difficult to imagine and understand unreasonable behavior. An intelligent person may understand the logic of a bandit. The bandit’s actions follow a pattern of rationality: nasty rationality, if you like, but still rationality.
P53 / 2022-09-22 19:56
5、
Class and caste were the social arrangements that favored the steady supply of stupid people to positions of power in most societies of the preindustrial world. Religion was another contributing factor. In the modern industrial world, class and caste are banished, both as words and as concepts, and religion is fading away. But in lieu of class and caste we have political parties and bureaucracy, and in lieu of religion we have democracy. Within a democratic system, general elections are a most effective instrument to ensure the steady maintenance of fraction σ among the powerful. One has to keep in mind that according to the Second Basic Law, the fraction o of the voting population are stupid people and elections offer to all of them at once a magnificent opportunity to harm everybodyelse without gaining anything from their action. They do so by contributing to the maintenance of the o level among those in power.
P48 / 2022-09-22 19:54
6、
by far the majority of stupid people are basically and unwaveringly stupid — in other words they perseveringly insist on causing harm and losses to other people without deriving any gain, whether positive or negative. There are, however, people who by their improbable actions not only cause damage to other people but in addition hurt themselves. They are a sort of super-stupid
P42 / 2022-09-22 17:54
7、
A stupid person is a person who causes losses to another person or to a group of persons while himself deriving no gain and even possibly incurring losses.
P34 / 2022-09-22 13:51
8、
whether you move in distinguished circles or you take refuge among the headhunters of Polynesia, whether you lock yourself in a monastery or decide to spend the rest of your life in the company of beautiful and lascivious women, you always have to face the same percentage of stupid people — which percentage (in accordance with the First Law) will always surpass your expectations.
P19 / 2022-09-22 13:41
9、
The probability that a certain person be stupid is independent of any other characteristic of that person.
P16 / 2022-09-22 13:37
10、
Always and inevitably everyone underestimates the number of stupid individuals in circulation.
P9 / 2022-09-22 12:24